Bonny is a culture-rich traditional state, steeped in deep recorded history dating back to the 18th century. Situate in a resource-rich island spanning approximately 215 square kilometers located in the south of Nigeria.

The industrialization of the Bonny Island continues to grow with major inward investments by the major oil and gas companies in Nigeria including but not limited to Nigeria Liquefied Natural Gas (NLNG) which operates a 6-train LNG plant producing 22 million tonnes per annum (MTA) of liquefied natural gas yearly; Shell Petroleum Development Company (SPDC) which exports crude oil from its terminal – Bonny Oil and Gas Terminal (BOGT) which is the largest of its kind in Africa; and Mobil Producing Nigeria (MPN) which operates its onshore fractionation and storage facilities at Bonny River Terminal (BRT). 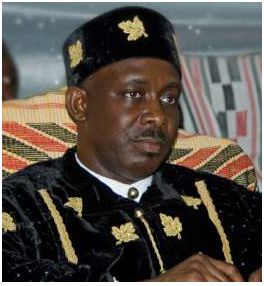 “It is my vision that the kingdom experiences rapid, sustainable long-term growth, resulting in the emergence of a socially, economically and environmentally prosperous community with the highest quality of life”…

The Grand Kingdom of Bonny is led by the visionary, dynamic and erudite Monarch His Majesty King Edward Asimini William Dappa Pepple III.

Since his ascension to the throne in 1996, the kingdom of Bonny has witnessed immense transformation in infrastructure, economic growth and security. His Majesty King Edward Asimini William Dappa Pepple III is an embodiment of the aspirations of the Bonny people for rapid development and modernization of the kingdom. He is a champion and advocate of institutional leadership which creates the enabling environment for the kingdom to leverage its vast human and material resources to advance its development agenda.

The Kingdom of Bonny is a traditional state based on the town of Bonny in Rivers State, Nigeria. In the pre-colonial period, it was an important slave trading port, later trading palm oil products. During the 19th century the British became increasingly involved in the internal affairs of the kingdom, in 1886 assuming control under a protectorate treaty. Today the King of Bonny is the only recognized 1st Class Chief in Bonny and still commands immense traditional power in the Kingdom.

Currently, Bonny is prominent because it harbors the largest crude oil & Gas export terminals in Africa.

The King of Bonny in his desire to tap the benefits of foreign investments in his kingdom has set up several institutions to aid the development of the Kingdom. Some of those include:

The International Oil Companies (IOC’s) present in the Island have responded to the challenge of developing Bonny by setting up the Joint Industries Committee. The Committee now ensures 24/7 electricity supply and security to the Kingdom.

In 2001 the Grand Bonny Kingdom Master Plan was launched with the laudable objective of transforming the kingdom into a dynamic and vibrant hub of people centered socio-economic growth anchored around the key pillars of sustainable development namely:

By combining the existing, rich environment of land and water with new urban centers, Bonny Kingdom will be transformed into a contemporary envisioned State by 2040.

The kingdom of Bonny is unrelenting in its drive to achieve its laudable 2040 objective and therefore vigorously seeks and Invites investors, businesses and stakeholders to partner with it in shaping the Green Heart City of Bonny.

The kingdom of Bonny is unrelenting in its drive to achieve its laudable 2040 objective and therefore vigorously seeks and Invites investors, businesses and stakeholders to partner with it in shaping the Green Heart City of Bonny.

The King is encouraging the effective and efficient running of Bonny Chamber of Commerce, Industries, Mines & Agriculture as a means of contributing to the development of viable private sector in the Kingdom.

We use cookies to ensure that we give you the best experience on our website. If you continue to use this site we will assume that you are happy with it.Ok